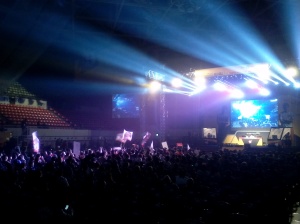 “Please get behind the line or keep walking!“ The security man behind me keeps telling in regular intervals. Penned in by a crowd of other spectators I am barely able to move, my feet are hurting from walking for several hours, I am tired and my head hurts from the incredibly loud spectacle surrounding me. But despite all of this I am smiling – after several months of studying from books and online resources I am now finally able to observe a tournament of Starcraft 2 live at Gamescom in Cologne, Germany’s largest trade fair for electronic games. And although I had watched many hours of live streams from major tournaments, I was not prepared for the excitement of the event.

“What’s happening here?” A woman walking by asks and is answered right away by another spectator: “This is the world championship.” “So you mean those guys are playing a computer game against each other?” I can see the puzzled expression on her face as her gaze wanders over the enthusiastic crowd and the stage assembly with its soundproof player booths, desks for the commentators and huge projections of the game. If she knew the height of the prize money on the line for the players and the amount that some of them earn as a monthly salary, her confusion would probably run even deeper – at least this was inevitably the reaction I observed every time I described the phenomenon of professional electronic gaming (esports) to others.

Over the course of my next blog posts I am going to give you a small glimpse into electronic sports and the culture surrounding it. I hope to maybe not only spark curiosity for this little known aspect of internet culture, but will also try to show how and why it can be of interest for anthropology. The topics I plan on covering are influenced by some of the questions I stumbled upon while observing esports. Questions like: “How did esports develop?” “What does it mean for the players to dedicate their life to electronic gaming?” “Since almost all professional players are male – which role does gender play in the scene?” “Why are all non-Korean players called ‘foreigners’ in Starcraft 2?”

To end this blog post, here a short video used for advertising one of the biggest Starcraft 2 tournaments, which should give an impression of what a tournament venue looks like.

View all posts by timostertag